Sino Uhara (右原 篠生, Uhara Shinō?) is a supporting character in the Gakkou Gurashi! series. She is a student at Saint Isidore University and a member of the Melee Fight Crew. Though shy by nature, Sino is the primary "zombie killer" of her group, as she is considered very important by her teammates.

Sino is a beautiful, relatively tall young woman with a slim and noticeably womanly figure. She has long, straight; though slightly wavy, pale chest-brown colored hair, which she has tied to a ponytail at the side with a white and blue striped scrunchie. She wears her hair in straight bangs; and she has two bobby-pins on her fringe and two other near her left ear.

When in combat situations, Sino is usually seen with a black suit that covers her whole body and black boots, with a pink-colored helmet. Otherwise, Sino is normally seen wearing a short-sleeved white shirt with black top underlying it, and she also wears a turquoise colored jacket, with black and white stripes at the sleeves. She also wears black shorts, long, white stocking that covers her whole legs except her thighs, and black sneakers.

Sino has a reserved and quiet personality, as she was seen being very withdrawn during her introduction. However, she is the one who fights the zombies in her "group", much like Kurumi Ebisuzawa, so she is very tactical and strong. She is thoughtful towards her friends in the Melee Fight Crew, especially Kougami; as she became very sad and depressed over his death. She also confident in her abilities and wants to fight the zombies herself as she is good at it, so the others don't have to worry. She is noted by Ayaka to be very important to them and their survival.[1]

Despite her innocent personality, she doesn't hesitate to attack others who can be considered enemies. When the Melee Fight Crew began their mission to attack the Fallen Crew and School Life Club, she threatened to inject Aki Hikarizato with zombie blood.[2] She also captured Yuuri Wakasa in order to gain information and supplies, but she does this for her own groups benefit, and in these situations, she usually carries a level-headed and calm demeanor. However, after capturing Yuuri, she was seen being slightly guilty,[3] though this also could be perceived as Sino being slightly worried, as Yuuri told Ayaka that she would never forgive her if she would hurt Ruu Wakasa. However, she also seems to have a more sympathetic side, as she appeared to be the only one of her group what wasn't generally happy to get revenge for Kougami,[4] even though he was the one closest to her.

After meeting Yuki Takeya, Yuuri Wakasa and Miki Naoki, she was clearly seen being upset as she asked them if they were the ones who killed Kougami. They denied it, and Sino commented it being just as she thought, as she didn't think they would do something like that. She even apologized to them for Kougami's behavior when he first met them since he fired a crossbow at them. She also seems to be very understanding and patient, as she immediately accepted Yuuri's delusions after hearing about it from Miki, even telling her that she would find her younger sister Ruu Wakasa, even though Sino's team is responsible for Ruu's "kidnapping". When Yuuri asked Miki if Sino was a good person, she replied by saying that there are very different people in the world.[5]

Later in the story, "switches" sides and helps the School Life Club and Fallen Crew in need. Despite killing many people before, she wants to live for her unborn baby that she had with Kougami.[6] She also starts taking care of "Ruu" in Yuuri's stead. A kinder, warmer and friendlier side of hers is shown later on.

Sino and Ren were on good terms and cared deeply for each other, with a romantic and sexual relationship between the two heavily implied. Ren was shown to have worried about Sino overworking herself and wanted to take on some of her duties for himself. Sino refused, reassuring him that she would be fine as she's better at fighting. Ren still seemed anxious and dissatisfied, however, which lead to Sino embracing him and stating that she would never lose.[7]

It was also heavily hinted that Sino has been pregnant with Ren's child, as she touches her belly every now and then, often after talking or thinking about him.[8][9] When Ren became infected and died, Sino became immensely depressed, to the point she couldn't even cry at his death. She stated that his hat is the only thing she has "left" of him, which continues to show how much she cared for him. Even after his death, his influence on Sino has lasted much longer, as she continues to react sadly and strongly way when someone mentions him, and Ayaka (though indirectly) stated that Ren was a precious and loved person by Sino,[10] and still is.

It is later revealed that she is pregnant with Ren's child, which is the thing that gives her the will to live.

Later on Ayaka's view of Sino seemed to change; She says she is tired of Sino's "Gloomy expressions" and not-so-slyly threatens her, saving that "It'd be better to wipe (the people full of complaints with their dead eyes) out without a trace,"[11] She continues on to say that Sino may die, but she won't, and walks away without a second glance; effectively cutting off whatever sort of relationship the two may have had.[12]

Originally, Sino appeared indifferent to the actions of the girls untio Kougami's death. She later assisted in their capture after being convinced by Akaya that she could avenge his death. Sino also interrogates the School Living Club over Kougami's death. After Miki, Yuki, and Yuuri deny having anything to do with Kougami's death, Sino mutters "I knew it", confirming that she knew that her boyfriend's infection was not intentional. Later, it is implied that she joined the Fallen Crew.

After seeing Yuuri's distress, Sino offers to look for Ruu-Chan. When Sino revealed that she was pregnant, Yuuri hiding nearby with Miki overheard. Yuuri later asks Sino to take care of Ruu-chan while the School Living club ventures to the Randall Corporation.

Much like Kurumi, Sino is much like the strategist of the Melee Fight Crew. She is usually the one who kills the zombies and she also seems to be know where all the Fallen Crew members and Rise resides. She is very skilled at killing zombies, as she killed four of them in a row,[13] and she was even able to take blood from those zombies without getting hurt before killing them. Because of this, Sino's weapon is syringe filled with zombie blood. 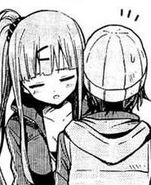 Sino at the cover of the of eight manga volume.

Sino agreeing to take care of "Ruu".
Add a photo to this gallery

Retrieved from "https://gakkou-gurashi.fandom.com/wiki/Sino_Uhara?oldid=18383"
Community content is available under CC-BY-SA unless otherwise noted.